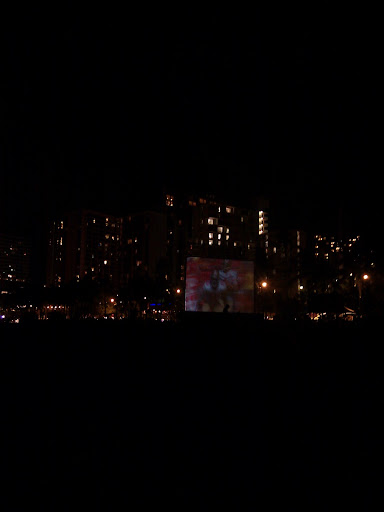 We got up early this morning, it wasn't dificult because we're still on San Francisco time which is 2 hours in front.  Our aim was to crack Diamond Head before noon when we had to check out. Diamond Head is an extinct volcano crator which you can climb into and up to the top. It was a good 30 minutes march from the hotel, then a steep climb with lots of steps. Obviously we were prepared, with water, proper shoes and sun cream, but it amazed us how many flip flops we saw. I had a proper sweat on when we reached the top, and this was at 9.30 in the morning, I'd hate to try it during the heat of the day.

The views from the top were truely impressive.  Lush green mountain sides, sprawling city skyscrapers of Honolulu, and the royal blue Pacific all in one. Close your eyes and imagine it, then marvel at our mobile phones attempt to capture it!  We have better pictures on the proper camera that I'm sure we will bore you with on our return! For now, whilst I'm sat in a water front bar, typing in my phone, it will have to do. It's ok, don't feel sorry for us, we have beers.

So a quick shower and check out, we still couldn't tell for sure if the ship had arrived this morning. The one thing that I had hoped to see from the top of diamond head, was the ship. The ship Webcam was offline too, so couldn't see where it was. But the taxi driver reassured us that she had docked this morning and I was relieved to see her again as we got closer.

Getting back on was a bit more hassle than we'd anticipated but we made it. You see they'd taken our ships cards from us when we got off in SF, so they had to make some calls and reissue them as we waited on the dock. As previously, Katie is not British so she didn't enjoy the wait, nor make friends with the officials :-)

When I have a proper keyboard in front of me, I'll try to describe the feeling of returning after having to think for ourselves.

After a free lunch on board, we headed out again in search of sand and surf. We only found rocks. Nice ones, but rocks none the less.  And that, my friends is what led to us being sat in a bar, on the water front, drinking beers. Not a bad last day.  Dinner on board sounds good tonight, we missed our dinner companions. And the service. And the food. And not having to think too much.

Email ThisBlogThis!Share to TwitterShare to FacebookShare to Pinterest
Labels: English