The night before arriving in Singapore, we were sat outside in our favourite bar, Aquarius, at the aft of the ship.  We'd eaten out there that night because we didn't fancy a full sit down experience.  We were joined by Melissa (Katie's pool jumping companion - that seems like a long time ago!) and also Hans, our First Officer friend who we met at "drinks with Captain" - also a long time ago.  He'd been to Singapore many times before and so was offering us some advice on things to do and see.  He was also explaining that we were docking into a rather large container port in Singapore, mainly because Arcadia is too tall to fit underneath a cable car that is suspended across the bay.  Bummer.  We're learning that big cruise ships are not always better ones.  Smaller ones might have less space or facilities on board, but they can dock in smaller ports and get to places that larger ones can not.

The port of Singapore is apparently, the 2nd busiest in the world after Shanghai in China measured by containers moved.  I can well believe it, the place is massive.  After a quick inspection on the key, we boarded a bus that took 10 minutes driving just to reach the exit to the port.  Our coach would take us on a "highlights" tour in the morning, and then we'd have the afternoon to do as we pleased.  We stopped at some pretty impressive Botanical Gardens, which had more Orchids growing than...well...somewhere where lots of Orchids grow.  I can't think of an analogy!  We were told that you could easily spend 2 days in these gardens if you wanted to see it all, we had 45 minutes.  For me, it was sufficient.  Next up on the highlights of Singapore was a water feature.  Named the "Merlion", it's a statue of a Lions head on a mermaids body, and it's apparently quite famous.  We took a few pictures, it seemed the right thing to do, but if I'm honest, the views across the bay and street artist who owned a big Boa Constrictor caught more of our attention.  We weren't allowed to be distracted too long, it was back on the coach for the next highlight.  Wait for it...China Town.  Every city has one, Singapore is no different except that this was possibly one of the tidiest, cleanest China Towns we've seen so far.

After China Town, the coach was heading back to port to drop people back at the ship, but there seemed little point in doing that, so we left the tour and continued on our own.  I was a little concerned that if we'd succeeded in seeing the highlights in 3 hours, that there would be little left to do this afternoon, but things improved considerably.  We walked to Clarke Quay, a nice area along the river side with lots of restaurants and cafes to choose from.  It was properly hot now but it was the humidity that I found difficult to deal with.  We ate outside, in the shade, and I ordered 2 pint sized glasses of sprite.  They didn't even touch the sides.

Gluten for punishment we skipped the extremely efficient, safe, clean and air conditioned underground train system and walked again to our next point of interest which happened to be Raffles Hotel.  Named after Sir Stamford Raffles, the founder of Singapore, no visit would really be complete without seeing it.  We did one better and sat at the bar in the open court yard and drank 3 Singapore Slings.  1 each that is.  They were very good, but strangely not really in keeping with the prices in the rest of Singapore!  The hotel itself was very impressive though, a little piece of colonial history amongst the modern skyscrapers.

Although not planned, Katie and I also quite fancied a ride on (here we go again) the worlds tallest observatory Ferris wheel, the Singapore Flyer.  Another pleasant, if rather warm, walk took us to the wheel where we paid about 15 pounds each to take the trip.  It was cheaper than London's example and there were virtually no queues.  Predictably, it gave us great views, I'd have wanted my money back if it hadn't(!) but we couldn't see Arcadia from up there.  However, we did see a stack of other ships, large and small queued up waiting to dock into the port.  There must have been over 100, stretching from our furthest view on the left, all the way to our right.  We shared the large, air conditioned cabin with a group of girls from Perth, some of whom appeared to be quite scared of heights!  They were quite noisy but good fun, and they were very interested to hear about the cruise.

After we got our feet back on the ground, we jumped into a taxi to head back to the Cruise Centre, where a coach would take us back to the port.  We'd been informed earlier in the day that it wouldn't be possible to take a taxi directly back to the port, as they wouldn't be allowed through the gates.  It seemed to limit our options about getting back to the ship, we had to use the P&O coach which was leaving a little earlier than we would have liked.

It's not hard to be impressed by the cleanliness of the city and to notice how truly green it is.  Often we hear of places that have lots of parks and trees but none we've been to have the same level of green as Singapore.  As an example, all the major roads have mature trees growing down the middle of them, you will almost never see a bare concrete wall because it will have some kind of vegetation growing up it and around it.  Even the huge supporting pillars of fly-overs, hidden underneath the road have plants attached to them.  We were told that there are 5 million people living in Singapore, and there is 1 tree for every 5 people.  If it were a village, it would win the "best kept" prize every year.  As a tourist destination, on the outside, it sounded perfect.  The things that make us happy right now are taxi's that are metered, places that are within easy walking distance, or transport systems that are easy, safe and clean to use.  Add to that, prices that are reasonable, a population that speaks fluent English and market traders that let you browse in peace!  Singapore had all of these but that's not to say it was perfect.  The same rules that make it a safe, clean and tidy place seem also to give it a very clinical feel with no soul or personality.  Maybe we needed to dig deeper to find that, or as with many places, it probably changes when the sun goes down, unfortunately we weren't able to experience that. 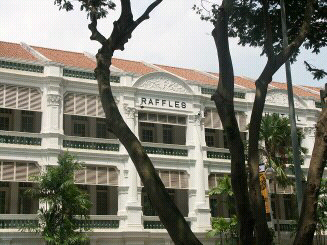